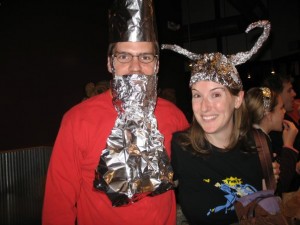 Keith and Jen grew up and work in the Twin Cities.  We started dating as Jen was finishing college and hit it off right from the beginning.  Keith thought Jen was one cool chick, and Jen thought Keith was one smart cookie.  The dream team became official when we got hitched a few years later and has only gotten stronger since.

Jen got hooked on nature early on.  She grew up car camping with her family in the many wonderful state parks around MN.  Keith didn’t have as much experience but liked hiking and being outdoors, so he was game for anything Jen came up with.  Our vacations started to focus on camping and we took many enjoyable trips in Minnesota, Colorado, the Black Hills and the Badlands. Neither of us had any idea that this enthusiasm would ultimately lead to a five month trek from border to border!

A few years ago Jen came across the journal of a PCT thru-hiker while surfing the web. She knew about the Appalachian Trail, and that people would try to hike it end-to-end in one season, but the concept had never really snagged her interest. This was the first she had heard of the AT’s sister trail on the West coast.  The idea of hiking through desert, old-growth forest, and two of the nation’s most scenic mountain ranges in one long trip was intriguing. She was hooked right from the beginning.  Never mind that we had no backpacking experience whatsoever, or that we had never been camping for more than a week at one time – someday, she resolved, we were going to do this. 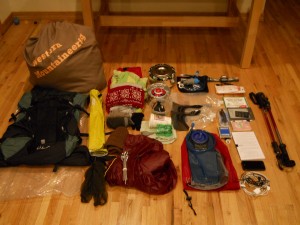 This was news to Keith!  As always, though, he was game for her crazy schemes. We spent the next winter learning everything we could about backpacking and assembling our gear kit.  One of the first and most encouraging things we found out was that it wasn’t necessary to carry 50 pounds in a pack – or even 30 pounds!  Thanks to the ongoing lightweight revolution in the industry and small, independent gear companies we could carry less than 20 pounds and still have everything we needed to enjoy ourselves.  We were able to tailor our equipment purchases to a lightweight strategy right from the very beginning. From there it was off to the races – exploring what worked for us, what didn’t, and accumulating enough experience to make a successful PCT thru-hike feasible when life gave us the chance.

Our first trip came the following spring at Lake Itasca State Park.  The best part about it was the realization that a four mile hike could get us our own isolated campsite on a lake.  We were the only people around, with no generators or late-night partying to bother us.  The worst part of the trip?  TICKS.  It had been an especially bad season for them and by the time we reached our campsite we were covered in them.  This was a defining moment for Jen especially, who was not very squeamish about bugs in general but had an intense dislike of things that sucked your blood and transmitted diseases without you realizing it.  Faced with the choice of being confined to a tick-free tent all weekend or overcoming her ick factor, she got over it.  Things got much easier when we ignored all fashion protocol and tucked our pantlegs into our socks. 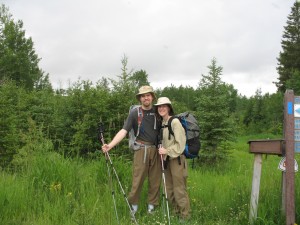 east end of the SHT

Later that summer we took our first “real” backpacking trip along the Superior Hiking Trail in northeastern MN.  We started at the eastern end, just miles from the Canadian border, and hiked back to Grand Marais.  As usual Jen was ambitious and set tough goals.  We averaged 13 miles per day, which may not sound like much, but after four days of climbing and dropping into river valleys over rocky and rooty terrain we were so sore we could barely walk.  Our shoes had ranged from damp to soaking ever since the beginning of our first day when we had to wade through knee-deep water from the overflowing Andy Creek.  Between rainy overgrown vegetation and standing water puddles our feet never really dried out.  On our third day we were unexpectedly adopted by a dog that followed us the rest of the way. 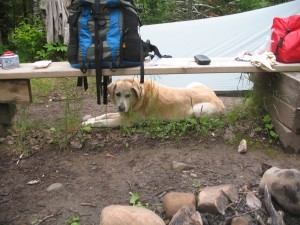 Despite these minor setbacks, we had an incredible trip!  It gave us a real feeling of accomplishment to be able to say that we hiked 50 miles in four days.  We loved hiking straight through from point A to point B instead of having to turn around partway through.  It was fun to pass mileage signs and watch far-off waypoints get closer and closer.  Most of all, we liked being on our own with each other in the middle of nowhere. Our first trip out was a huge success!  We clearly needed more training, and we weren’t sure we were ready for five straight months of this yet, but it was an encouraging first step. 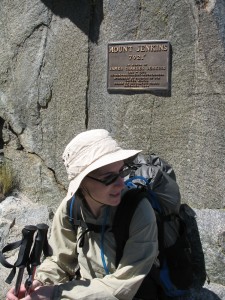 jen on the PCT

The following summer we got our first taste of the PCT.  In a convenient twist, we were heading to LA for a wedding and decided to take a few extra days for a quick out-and-back trip. Jen’s older brother joined us for a three-day trip starting at Walker Pass, where the trail enters the foothills of the Sierra Nevada.  Despite the elevation changes we were surprised to find that the trail tread was much easier than in Northern MN – sandy and dusty, and nearly clear of trip hazards.  It was a fun new experience to be able to keep our eyes on the scenery instead of our feet.  There was a lot of scenery to see, too!  We loved being able to see for miles from a ridgetop instead of being hemmed in by dense forest.  Jen’s favorite part of the trip was being able to pick out the trail as it crossed a saddle or climbed a hill miles away.  There was something satisfying about seeing it from afar and knowing that we would be standing in that spot in a few hours.  It was hard to turn around and head back…but we felt more sure than ever that we would be back someday. 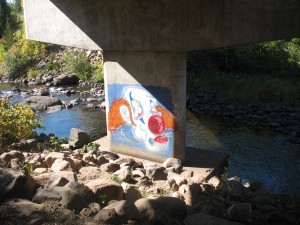 That fall we completed another 45-mile section of the Superior Hiking Trail from Grand Marais to Tofte.  We hit near the peak of the fall colors and had spectacular views and weather.  Since the forecast was so dry and all the bugs had already been killed off, we slept under the stars every night instead of putting up a tent.  It was incredible to watch shooting stars from the warmth of our puffy down sleeping bags.  We fared much better physically on this trip than we did on our first section and ended with a craving for pizza instead of a craving for Advil.  Plus, no dogs to take care of!

Last summer we took on our longest, most challenging and most rewarding hike yet – completing the 93-mile Wonderland Trail around Mt. Rainier.  Our imaginations had been captured the previous fall during a trip to Seattle.  On clear days the mountain seemed to be RIGHT THERE, close enough to touch.  This got Jen thinking and planning (always dangerous) and by the following March we had enough of a plan to apply for a backcountry permit.  Neither of us said it out loud, but we both saw this trip as a gauge of whether we were ready for the PCT.  It introduced a number of factors missing on our previous trips that we would face on a thru-hike: resupply shipments, big elevation changes, and a week’s stretch without civilization.  We took 11 days to hike the loop – pretty leisurely, but we wanted time to enjoy the scenery.  We were also conscious of the fact that we came from the relatively flat Midwest and weren’t used to routinely dropping into and climbing out of 3,000-foot river valleys at 6,000 feet above sea level.  During our hike we experienced 20,000 feet of elevation gain – about equal to climbing Rainier 2.5 times! 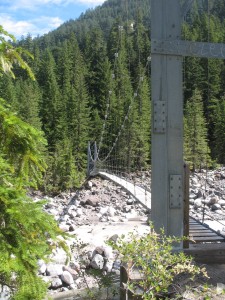 This was a complicated trip to plan with lots of logistics.  It required us to prep and mail two food shipments weeks before we even left.  We had to arrange transportation to the mountain since it sits about two hours outside of Seattle.  Hanging over everything was the ultimate question – could we hack it once we got out there?  Happily, the answer was an unqualified yes!  Our first day out was darn tough – especially on Jen – but we could feel ourselves getting stronger right from the very beginning.  By the second day we had learned how to adjust our pace for the long uphill slogs.  By the third day our appetites had returned.  We had our share of challenges, for sure.  Our first resupply box was routed to the wrong pickup point and for a while we weren’t sure if it was even in the park. Our stove unexpectedly stopped working for a short time, probably as a result of being dropped in the fine volcanic dust around the mountain.  On our eighth night out Keith was sick with a stomach bug, so neither of us got much sleep.  He was still feeling rotten the next day – our toughest day, by unhappy coincidence, with 7,000 feel of elevation change over 10 miles.  We powered through it all and kept our morale high, and by the time we returned to our starting point we felt strong enough to take over the world. 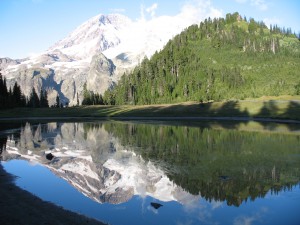 On our last night out we talked a lot about how the trip had gone and what it meant for our next step.  We finally felt like we had enough practical experience to be confident in tackling the PCT.  The biggest remaining unknown was the sheer duration of the trip. Working full-time doesn’t lend itself well to taking a month off at one time, so this was the one thing we couldn’t try out beforehand. That night we both thought that 11 days had already felt like a full month in the most enjoyable kind of way – it’s amazing how time stretches when you’re actively living every moment.  But could we make it for five months straight?  Could we leave family and cats for that long without getting majorly homesick?

Of course we still can’t really answer that question, but as the Magic 8-Ball says, “all signs point to yes.”  By the time we flew home after a few post-Rainier days in Seattle, Jen was ready to get back out on the trail.  After a week or two back at work we were both craving the unstructured simplicity and physical challenge of hiking all day.  By the time a month had gone by we were both committed to making this trip happen.  If we didn’t at least attempt it, we would always be left wondering and regretting.

Once we made our decision things really started to line up as if by magic.  Jen’s younger brother was looking for a place to stay during the summer, so the house and cats would be taken care of by someone we trusted. Keith’s parents had space for us to store our cars.  Keith is a software contractor and when he talked to his work about not re-upping right away, they were supportive – and even wanted him back when we were done.  Jen does R&D for the food industry, so things were a little more complicated for her, but she had been thinking about making a change for a while and this seemed like the logical point at which to do it.  However, when she tried to resign they came back with an offer of long-term leave!  We unexpectedly found ourselves in the position of taking a seven month vacation with excellent job prospects when we got back.  All of this makes us feel confident about our decision to finally take on the challenge of the PCT.  We’ll never have a better chance than this, so come along with us as we see how far we can get!

6 thoughts on “About Us”