We’re hitting the trail and living the dream!  Keith and Jen are going West to tackle the entire length of the PCT in one bogus journey.  We’ll join a herd of 300-500 others in our pursuit of the highly-coveted title of thru-hiker. According to one estimate only about 40% of us will make it the entire way.

The Pacific Crest National Scenic Trail begins at the Mexican border in Southern California.  It winds along the mountain ranges of California, Oregon and Washington to the northern terminus at the Canadian border.   The trail is about 2,650 miles long depending on how many fire closures or other detours are in effect.  That’s quite a hike!  To help put things into perspective, here are some numbers we’ll encounter along the way:

In order to follow the mountain crest and to stay near water the trail meanders a LOT. If you were to drive from Mexico to Canada on I-5 your trip would be about 1,380 miles long.  By comparison, the PCT takes nearly 1,700 miles to cover California alone!

The Pacific Crest Trail Association oversees the preservation and maintenance of the trail.  They issue thru-hikers a convenient long-distance permit.  This means we don’t have to apply for individual backcountry permits from the many government agencies that manage the land the trail passes through.  That’s good, because we already have too much to do!

The trail begins outside of Campo, a small town about an hour east of San Diego. It heads north for the first 250 miles, leading us up into the mountain ranges of Southern CA and down into the deserts between them. At Big Bear City the path veers west and follows the crest separating the Mojave Desert from the sprawl of Los Angeles. A week’s hike later it turns north again and crosses the tip of the Mojave on its way to the Sierra Nevada 700 miles in.  On our trek through the Sierra we’ll cross raging creeks, miles of snow, and nine named mountain passes.  If the weather cooperates we will climb to the top of Mt. Whitney, the tallest point in the 48 contiguous states.

The town of South Lake Tahoe 1,100 miles down the trail marks the beginning of Northern California.  The granite of the Sierra gives way to red volcanic ridges.  Water becomes scarce again for the first time since the southern deserts.  After passing Mt. Lassen the path swings west to avoid the dry northeastern corner of the state.  It threads between Mt. Shasta and the northern end of California’s massive Central Valley before turning north again to follow the Cascade range to Canada.

Once it enters Oregon the trail gives up the zig-zagging of California and marches north with a purpose. Because of the long summer days and gentler tread many thru-hikers step up their mileage through the state – 30-mile days are not uncommon. Although the hiking is easier, Oregon can be a tough section for morale.  The trail is heavily forested and good views are rarer than in California.  Many of the biggest challenges and highlights of the trail – like the Sierra – have already been passed.  Most thru-hikers have been on the trail for over three months by now and it can be easy for homesickness to set in.  If we can keep our spirits up we’ll be rewarded with views of Crater Lake, the Sky Lakes Wilderness and the Oregon Cascades as we head towards Mt. Hood and the Washington border. 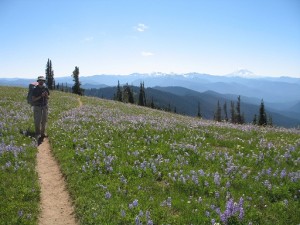 Mt. Adams from the Wonderland trail

In Washington the trail returns to scenic heights, but the weather can be a real spoiler.  The Cascades catch moisture rolling in from the Pacific Ocean and are often rainy and foggy.  In an unlucky year this can be almost constant, stopping hikers from taking in some of the most beautiful views on the trail – the Goat Rocks Wilderness, Mt. Adams and Rainier, and Glacier Peak.  The final segment cuts through the rugged and remote North Cascades National Park to end at the Canadian border.  Most hikers continue another seven miles into British Columbia’s Manning Provincial Park, where they dry out and bus to Vancouver.

In order to complete the trail in a single season, most hikers stick to a loose schedule.  Northbounders usually begin in late April.  Starting earlier than this can mean encountering poor weather in Southern CA and dangerously snowy terrain in the southern mountains. Those starting too late fight scorching desert heat and unreliable water sources as the region dries out.  The next major obstacle is the Sierra Nevada.  Depending on how much snow fell the previous winter, and how warm the spring was, the mountains can be snowier than hikers have bargained for.  The “standard” date most thrus target to leave Kennedy Meadows (the resupply point at the start of the Sierra) is June 15.  So far the snowfall for this year is running below average, but a lot can happen in three months!  This site lets us track current snow levels in the mountains and compare them to past years. Once hikers make their way through the Sierra, the only remaining deadline is to finish before winter starts in the Cascades.  This can happen as early as mid September so the pressure is on!

Our online plan (generated with the help of this awesome site) has us hiking for five months at an average of ~20 miles per day.  We think this is a pretty conservative estimate.  We’ll almost certainly end up taking longer because of weather delays, injury, resupply issues (like getting to the post office after hours or on Sunday) and additional days off in town.  We love being out in the backcountry but nothing improves our morale like modern plumbing, real beds, and lots of fresh food!

Food and Other Supplies

We plan to get most of our meals by way of resupply shipments from home.  Preparing the food and assembling the shipments is a huge effort that we’ve been working on for two months so far. We still have a long way to go!  The main advantage to all this trouble is that we won’t have the chore of shopping for and repackaging all our food on the trail.  This can feel overwhelming even in the best of circumstances and we’ll want to spend that time relaxing (and probably eating).  We also tend to have more appetite for our homemade meals than storebought.  However, we plan to buy our snacks in town.  Frequent snacking keeps our energy level up over 10-12 hours of hiking and hikers nosh steadily on food all day long. Variety is huge when we need to take in so many calories day after day, and it would stink to load all our shipments with snacks that we’re sick of by the third box. Buying them in town will give us the chance to satisfy random cravings. It will also let us buy the right amount of food to satisfy our appetites as they grow.

Our resupply schedule includes about 25 boxes.  On average, we’ll leave town carrying 4-5 days of food on the way to our next stop.

4 thoughts on “The Trail”