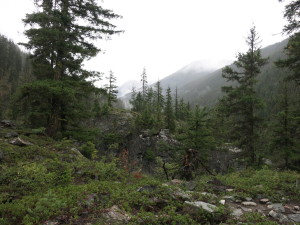 It was cold this morning!  Our tent looked like the quintessential REI ad, perched up on a knob against the fog and a backdrop of sheer granite cliffs.  Right after we got going we encountered a wet ford across Maple Creek. Rather than soaking our shoes first thing in the day we decided to ford the shallow water in our flip flops.  It was the right decision to make but the water was so cold that our feet numbed into clumsy blocks right away. Even in dry socks they took a long time to thaw out. The cool weather was pleasant as we hiked along in our ponchos. We passed through more damp rainforest as we climbed towards Rainy Pass and highway 20, the last major road between us and Canada.  As we neared the pass we came up to about 5000 feet and started to see patches of snow.  A bad blowdown just before a stream crossing forced us off trail and onto the road for the last few miles to the trailhead.  As we walked along the shoulder the snow started in earnest.  It was beautiful but worrying…if we were already at snow level with such heavy precipitation, how would things look at 7000 feet? We reached the pass without incident and decided to have lunch.  We’d hoped to be able to get out of the weather by sitting in one of the palatial forest service pit toilets – which sounds gross but is totally normal hiker behavior – but they were locked up tight.  Thank you, broken federal government!  We huddled up under the totally inadequate shelter of the trailhead info board and shivered as we cooked and ate.  Our feet were soaked again and our clothes were rapidly following suit in the damp falling snow.  As we ate two hikers came back down the trail from the north.  They’d attempted to push on but turned back as they neared Cutthroat Pass a few thousand feet above us.  They had been traveling at a slow but acceptable pace until they reached the end of the previously-broken trail, when their speed plunged to less than a mile an hour.  The snow was already 3 feet deep up on the ridge, heavy and wet and exhausting to move through.  The icing on the cake was a warning posted on the info board about two large trail washouts north of Hart’s Pass.  The suggested detour added lots of miles and was cluttered with blowndown trees.  Cold, wet and despondent at suddenly facing the possible end of our hike, we decided to hitch down off the crest to Winthrop and assess our options. 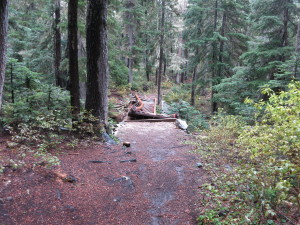