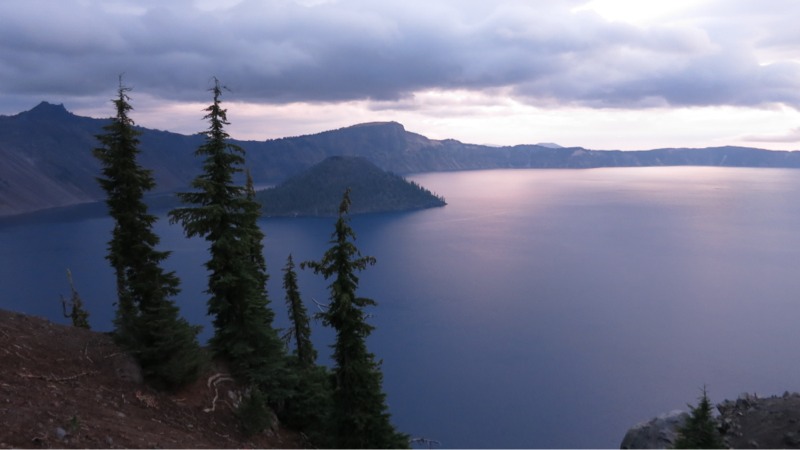 We were up and packed in record time under the light of our headlamps. Even with heavy packs it didn’t take us long to return to where we were dropped off last night. We hiked north a little to get a better view of the island and took a seat to watch the sky fill with color. The clouds were pretty heavy – it had rained a little overnight – and they lit up bright pink. We couldn’t see more than slivers of the sun itself as it rose over the eastern rim peaks, but it was still an incredible experience and we were happy that we got up early for it. As the sun got higher the wind came up and we quickly went from comfortable to cold. With the show mostly over we headed up the road to the lodge, looking forward to a hot breakfast and fresh coffee. After stuffing ourselves we went back to the main hall to finish charging our electronics. I sat down in a comfy chair next to the roaring fireplace and tried to read but ended up napping instead. Finally we roused ourselves to leave – just as it started to rain. We put on our ponchos and headed out into it. We stopped by a cafe to grab sandwiches for the afternoon and by the time we really started on our way the rain had mostly stopped. It got nicer as we started north on the 8-mile rim walk, with the sun shining and the fog over the lake lifting. We marveled at how the view changed every time the trail came to an overlook. We got a close up on the rocky western edge of Wizard Island and the “shallows” (still 90 feet deep) between it and the rim. In the small bays where the island’s rocks met the lake the water’s extreme clarity made it look green. As we rounded the Watchtower (the highest point we’ll reach in Oregon or Washington) we could hear thunder and see the low clouds rolling toward us over the forest. The next wave of weather hit with a slap – suddenly we were in a downpour, getting hailed on while a cold wind gusted. The sandy trail we were on turned into a river before our eyes and started to erode. We struggled on past tourists parked at the lookout points, snug and dry in their warm cars. The complete lack of trail signage made it even harder to follow in the rain and we got lost for a little before Keith pulled up the GPS. Finally we picked it back up and started heading north, away from the rim. As we descended into forest the wind died and the rain eased. It was easier going but still unpleasant as we splashed through enormous puddles of cold water. We put our heads down and hiked. We’d come through it mostly dry and completely sold on the ponchos, but it was still cold and the exercise helped warm us up. A few hours later we stopped to eat our sandwiches and realized that the rain had stopped. Not only that, but the little horizon we could see through the trees seemed to be getting lighter. By the time we finished eating and moved on the afternoon sun was shining intermittently through the trees and we could actually take our rain gear off. We reached the highway eventually and hung out our thumbs, hoping for a ride to nearby Diamond Lake. Our guidebook said there was a free hiker/biker camp there with water – a nice alternative to the nearly 30-mile waterless stretch coming out of Crater Lake. It took us a while to get a ride but eventually a woman who knew about the PCT and us hikers stopped. In no time at all we were 5 miles away in the wonderful tiny campground reserved just for hikers. We picked one of the 5 sites, spread our stuff out on the provided picnic table and set up. Incredibly, the nearby pizza place/store was still open at 6:30 on a Sunday and we picked up a large pizza and sodas. A relaxing early night and a delicious dinner were just what we needed after burning all those calories to stay warm. 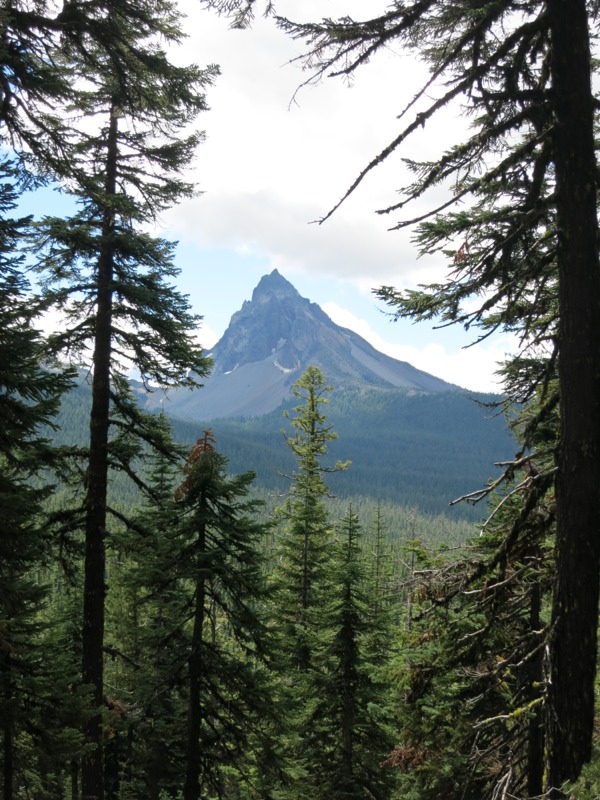 The first part of our day was taken up by the challenge of getting back to the PCT. We headed up a trail that paralleled the lake all the way to its northern tip, where we arrived at the chilly, windy Diamond Lake Resort. After a quick stop at their store for sodas (for later) and ice cream (for now) we continued north to the Howland Mountain trailhead. There we picked up a 7-mile trail of the same name that would supposedly lead us back to the PCT. Not all trails are as well-maintained as the one we’ve been following for four months, so side trips like this are a little bit of an adventure. Our guidebook described this trail as well-used and in fact it was in very good condition with fewer downed trees than we’ve encountered lately on the PCT. We worked our way back up to the Cascade crest, catching glimpses of craggy Howland Mountain and needle-pointed Mt. Thielsen at the very end of our climb just before we got back on trail. With the fun, relaxing side trip complete we started north again. We stopped to talk with a couple of southbounders at the semi-incorrect sign marking the high point of the trail through OR and WA. Semi-incorrect because if one took the equestrian trail through Crater Lake – which stays off the rim – this would be the high point. After an hour or so of chatting we moved on, bound for the water at Maidu Lake. This beautiful lake was a mile off-trail but was a better alternative than the next source, which was also off-trail but much further down the slopes. We filtered water and ate a leisurely late lunch/early dinner. We nearly stayed at the lake for the night but wanted to get the return climb out of the way before tomorrow. Our maps showed a loop trail that connected back to the PCT without any backtracking, but our guidebook described it as “defunct.” It was, but 90% of it was navigable by looking for the pathway through the trees. Downed trees were easy to step over except for a few large snarls. Once we got near the top where it rejoined the PCT the trail petered out, but from there it was a simple straight shot to regain our trail. Another mile of hiking brought us to a saddle where we’d planned to stay the night. Just as we thought, there were a few obvious campsites there already and we wasted no time setting up for the night. 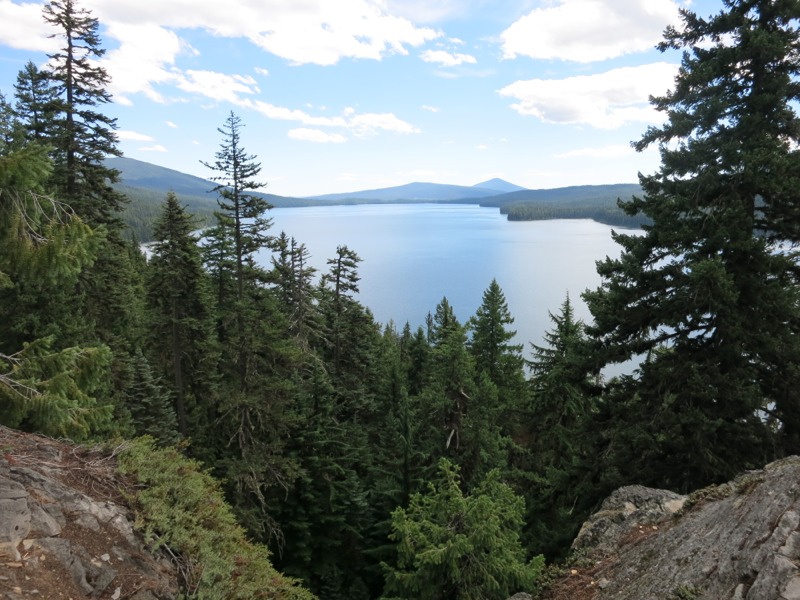 We took another alternate today – the old Oregon Skyline trail, which winds by many lakes while the PCT stays high and dry up on the crest. We started out with a 9-mile mostly downhill leg to a forest road and trailhead. A few minutes of road walking brought us to the start of the alternate. It stretched through the forest, mostly level but with a deep rut in the middle from the recent rains that made for tired feet. We stopped for lunch at Oldenberg Lake, closer in than the 4.5 miles indicated by the sign at the start of the trail. A curious chipmunk made it necessary for us to watch our food bags closely, but he didn’t bother the sleeping bags we’d put out to dry after the recent damp weather. After lunch we continued on through open forest. The lodgepole pines were sparse and undergrowth scarce, limited to low-growing manzanita shrubs. There was a surprising amount of dead wood scattered over the forest floor. Too bad we don’t ever make campfires. The trail eventually dumped us out at another road. According to our maps we had missed a turnoff somewhere. We hiked along the road for a bit and tried to rejoin the trail where the two came close to meeting, but even with a gps in the open woods we couldn’t find it. We returned to the road and hiked another short stretch until we came to a trailhead with a path that led back to it, clear as day. Either our maps are just wrong or the trail had been rerouted. We were glad to be back on and making progress forward. The rest of the day – 7 miles to Diamond View Lake – was surprisingly tough. It was hot and humid and we climbed over trail that was at times rocky and eroding. The mosquitos made a reappearance in force and were actually biting. We were glad to finally reach the lake and crawl into our bags as the chill of the night set in.