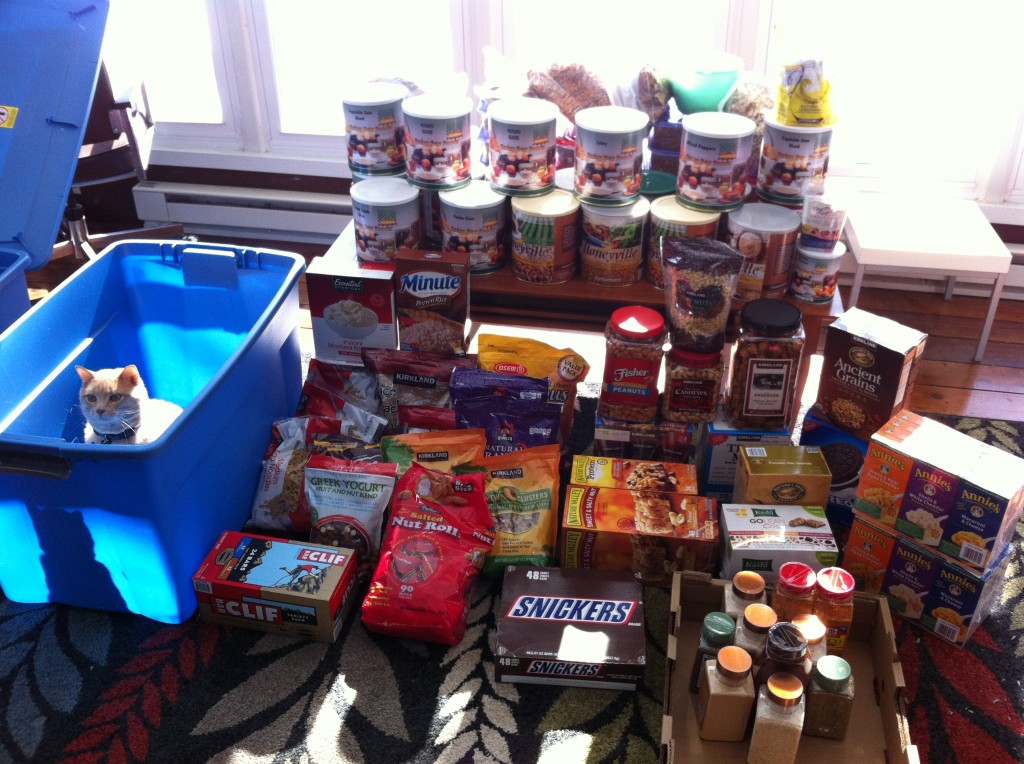 (Not the cat – he just likes getting in the way.)

We’re coming down to the wire! Keith has one week of work left, I’ve been done for a week, and we head west in just over three weeks.  There’s so much to do before then!  I’m still operating at 200% – standard General Mills intensity – so I’ve made a lot of progress, but it’s hard not to worry about all the work yet to be done.  I’ve been cleaning house and preparing to put things in storage.  Keith and I are both packrats.  Trying to reduce the amount of stuff we have on hand is stressful even though we always feel better once we’ve done it.  I have to confess that I really dislike 5S – it wouldn’t be so bad if it weren’t for that crucial “sort” step!

My first day off included a marathon trip to Costco to buy a cartload of snacks and ingredients.  I felt like Rodney Dangerfield in “Caddyshack” when he’s buying out the pro shop – “I’ll have a box of those, and give me a box of those naked lady tees, and gimme two of those, gimme six of those…”  It was an odd feeling to have to actually check the expiration dates on the boxes I was buying.  Most of our snacks are destined for the northern half of the trail.  Since the Washington, Oregon and northern California sections are so isolated we won’t have the luxury of buying them from nearby grocery stores. A bag of trail mix that expires in June might not be a wise purchase if we’re not planning on eating it until August.

I know about how many days we need to plan for but it’s tough to correlate that directly to, say, how many boxes of granola bars I need to buy. It’s probably safe to err on the side of buying too much since our appetites will go through the roof.  Estimates say that hikers will burn between 3000-4000 calories per day. Most people don’t carry quite that much since it would mean hauling a lot of weight.  They’ll have enough on hand to keep them going on the trail and make up for the deficit by chowing down in town.  I’m looking forward to this part!  Two pounds of food per day is a standard ballpark.  On our previous trips we never carried that much because our appetites tend to be small during the first few days of hiking.  I’m excited to see how that changes as we get past the first couple weeks!

The next big task is to start packing our meals.  My bags and oxygen eaters arrived earlier this week so there’s nothing stopping me from wading in.  Once we have those sealed up we can start breaking them out into about 25 shipments we’ll have mailed to us as we move north.

A trip to REI is in the cards for this weekend so we can spend our meager dividend and pick up a few pieces of gear.  Keith still needs a pair of microspikes for the mountains and I’m in the market for a headlamp.  We will also be keeping an eye out for clothes that will work well in the desert – something lightweight, light-colored and loose.  As usual, “fashionable” is pretty far down that list!